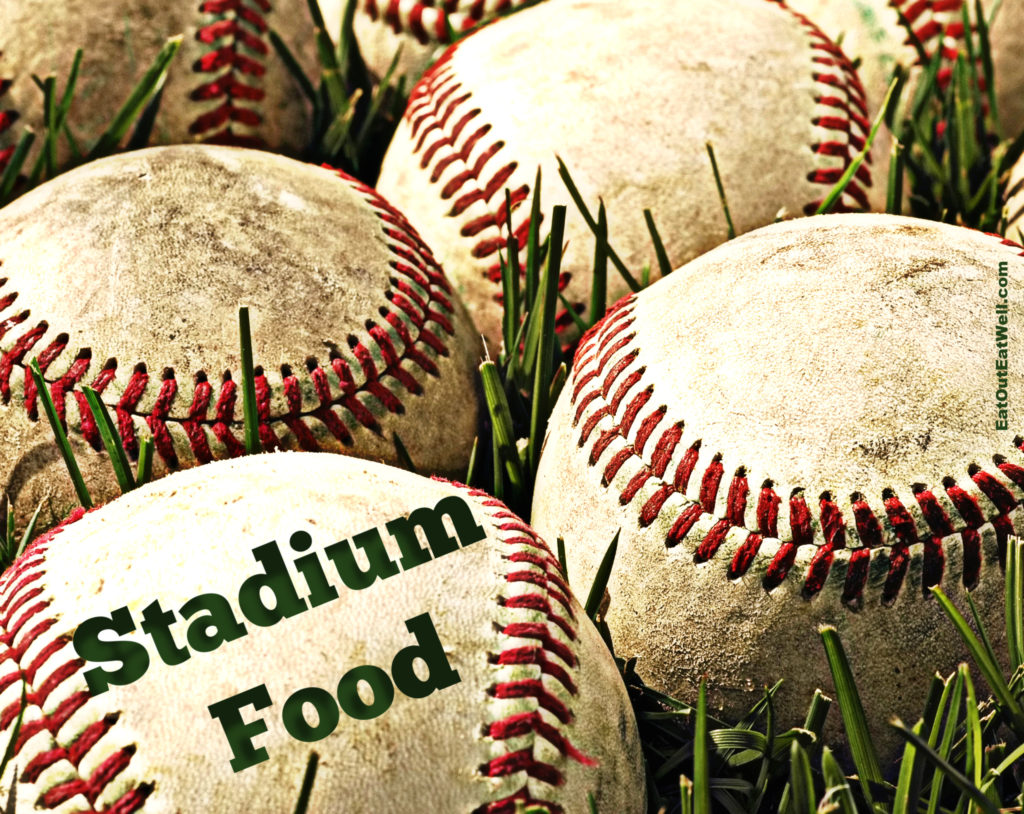 Baseball season is in full swing.  What accompanies a visit to the stadium – food, of course!

Oh, the food!  Oh the calories!  Hang on – this post is not about ignoring the good time food.  Of course, there are always healthy food options:  you can bring your own or be scrupulous in making healthy choices. And, there are now many more gourmet options available (but usually still loaded with calories). But honestly, do you think that most people really want to eat low calorie foods when they’re at a ballgame? No way.

So what do you do when you’re at these places with food vendors about every 20 feet hawking dogs, ice cream, and beer?

If you’ve got a will of iron, I guess you could ignore the food and drinks.  But if you’re like most people and you’re tempted at every turn, you can try to minimize the damage without taking out the fun.  If you know you’re going to be having a stadium or food court meal, do some thinking, planning, and learning.  The best choices are not always the obvious ones.

Do you need both peanuts and popcorn?  Can you make do with a regular hot dog instead of a foot-long?  Can you keep it to one or two beers instead of three?  Can you choose the small popcorn instead of the jumbo tub?

Here’s some info to help you make your best choice.  Just a heads up – we’re not talking about the most nutritious choice because given these foods, quality nutrition is not front and center.  You can, however, enjoy your day and make the best caloric choice (with a nod to fat and sugar content) and still eat traditional ballpark and amusement park food. 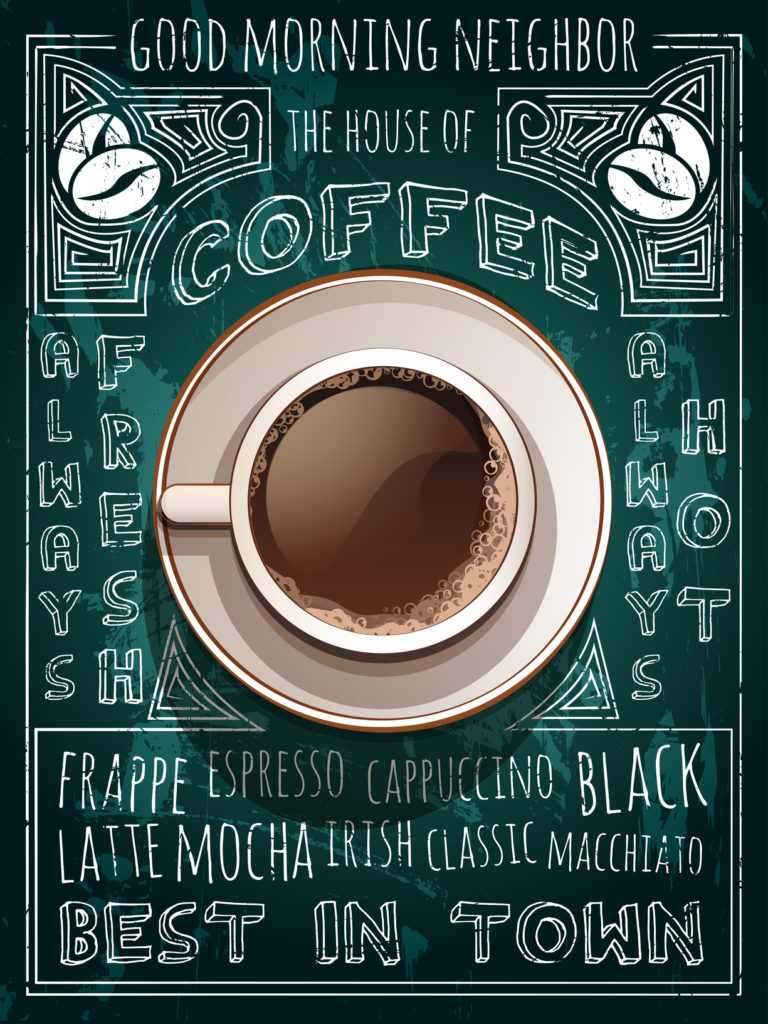 Morning coffee.  Coffee break.  Afternoon tea.  A nice cup after dinner. Many of us love – need – our coffee or tea.

A nice hot steaming cup of coffee or tea can hit the spot and a hot skim latte is a great snack – soothing, calorie controlled, and protein laced.  On the other hand, a giant hot coffee drink filled with syrup and whipped cream – often clocking in at 400 to 500 calories — might be soothing but sure isn’t great for your waistline.

Black Or Light And Sweet?

How do you like your coffee?  Black, light and sweet, regular?  Do you add sugar and pour milk until the color and taste is just right?

As you dump sugar and pour cream into mugs and those too hot to touch cardboard containers, have you ever thought about how many calories you’re actually adding to an otherwise very low calorie drink?  Probably not. They’re calories not usually measured and all too easy to forget.

What Do You Put Into Your Coffee Or Tea?

There are about two calories in eight ounces (a small cup) of unsweetened black brewed coffee or tea – doesn’t matter if it’s hot or iced. Not a bad deal.

What a lot of us don’t think about is how many calories are in the add-ins that we stir into our coffee and tea.

How much milk or half and half do you add to your coffee or tea? How much sugar? Bet you don’t have a clue.  We all do a freehand pour.  Try measuring how much you pour and you might be really surprised.

How’s This For An Eye-Opener?

If you add 4 tablespoons of half and half and three teaspoons of sugar to each that’s adds up to128 calories for the additives and around 5 calories for the coffee.  That’s 133 calories for each grande/large cup of coffee. Have three of those and you’ve added 399 calories a day from coffee (or tea).

Do that every day for a year and mathematically that’s the equivalent of 145,635 calories. Does that make you stop and think? 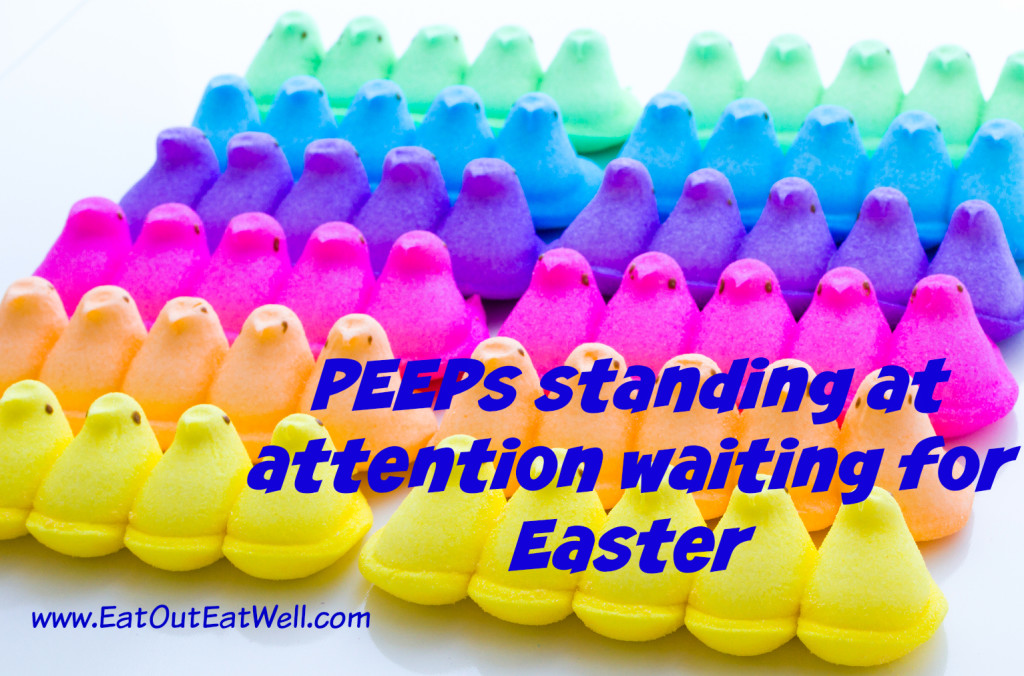 If you have a thing for the fluorescent squishy marshmallow bunnies and chicks that were hatched over 60 years ago, you’re not alone. PEEPS, the number one non-chocolate candy for Easter, got its name – PEEPS – because it was originally modeled after the yellow chick.

Every year, PEEPS are the subject of lots of design contests (you’d be amazed what you can make out of peeps) and scientific experiments (some claim them to be indestructible). Just Born, the parent company of PEEPS, claims to produce enough PEEPS in one year to circle the Earth twice. Their website even boasts a fan club and a section for recipes.

People have definite Peeps preferences. Some like them nice and soft, others like to leave them out in the air to age to perfection and acquire a little crunch on the outside.

They’ve been microwaved (careful, they expand and can really make a mess in your microwave), frozen, roasted, used to top hot chocolate, and added to recipes. Because their outer sugar coating tends to burn, they don’t toast well on sticks like regular marshmallows.

In case you would like some PEEPS recipes, check these out! 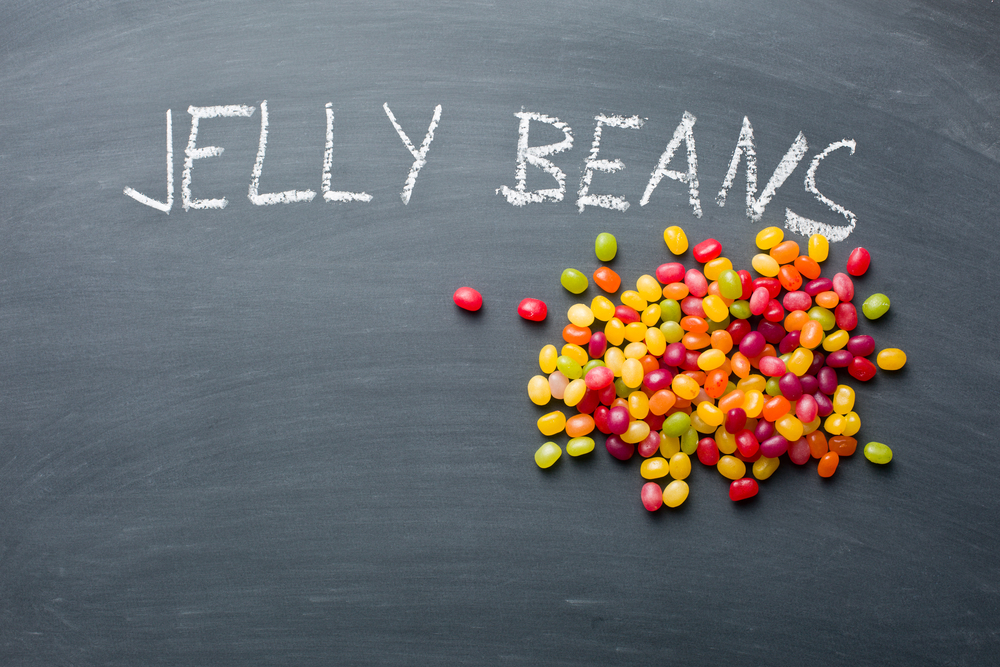 Jellybeans: do you think they should they should come with a warning label, “STOP NOW or you’ll keep eating until they’re gone?”

Seriously – it’s pretty darn hard not to love those little nuggets of sweetness that come in multitudes of colors and flavors and get stuck in your teeth!

The Birth Of The Jellybean

The gummy insides of the jellybean might be related to the centuries old treat, Turkish Delight. And their outsides bring to mind the colored hard candy coating, developed in the late 17th century, for the Jordan almond.

The modern jellybean became popular during the American Civil War when Boston’s William Schraft encouraged sending candy to Union soldiers and the jellybean held up well.

Jellybeans were the first bulk candy. They were first sold by weight as penny candy in the early 1900s – bulk jellybeans for nine cents a pound.

Around 1930 they became popular as Easter candy because of their egg shape, which represents spring, fertility, and resurrection.

The Many Flavors And Colors Of Jellybeans

Standard jellybeans come in fruit flavors but there are a huge number of flavors available — some goofy, some sophisticated — like spiced, mint, gourmet, tropical, popcorn, bubble gum, pepper, and cola.  They also come in a sugar free version (seems weird, but true).

Whatever your flavor preference, Americans eat a whole lot of jellybeans – around 16 billion at Easter — enough to circle the globe nearly three times if all the Easter jellybeans were lined up end to end.

Handfuls Or One By One, And What Flavor?

How do you eat your jellybeans? Do you go for handfuls at a time or pick and choose your colors and eat them one by one?

What’s In The Hard Shelled Nugget Of Sweetness?

How Many Calories Are In Jellybeans?

Even though they may give you Technicolor insides, jellybeans are fat free.  On average: 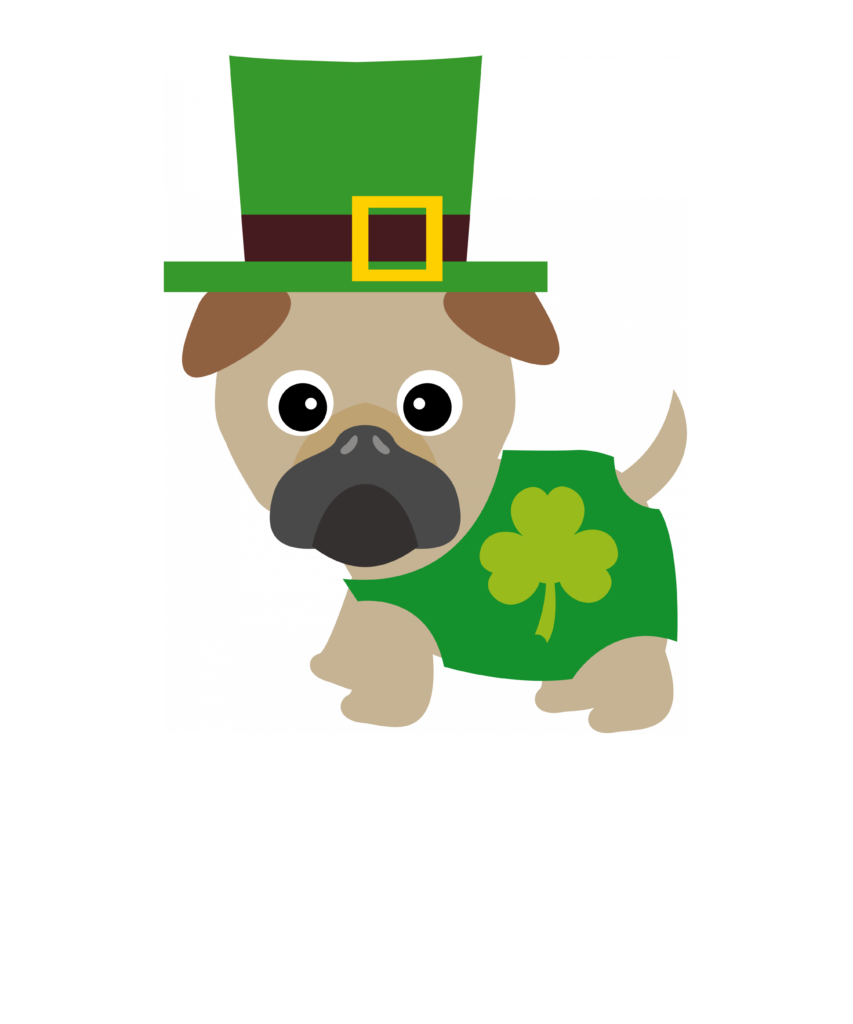 It must be St. Patrick’s Day when you spot green bagels and green milkshakes. But, there’s also corned beef and cabbage – and “Irish soda bread” with a cruciform, or cross, slashed on top.  Have you ever wondered why the shape of the cross is slashed on the top of the bread – and why it’s known as soda bread?

The earliest reference to the chemical reaction that makes soda bread rise is actually credited to American Indians.  Centuries before soda bread became popular in Ireland, Native Americans added pearl-ash (potash), the natural soda in wood ashes, along with an acidic ingredient, to make bread rise.

Bread Soda or Bicarbonate of Soda

Soda bread became popular in Ireland when bicarbonate of soda, also known as bread soda, became available to use as a leavening agent.  Bread soda made it possible to work with the “soft” wheat grown in Ireland’s climate. “Hard” wheat flour, the main kind used in the US today, needs yeast to rise properly. “Soft” wheat flour doesn’t work well with yeast but is great for “quick breads” like soda bread.

According to The Society for the Preservation of Irish Soda Bread, the earliest published recipe for soda bread was in a London magazine in 1836 – also later repeated in several US papers – that refers to a “receipt for making soda bread” found in a newspaper in Northern Ireland. The claim:  “there is no bread to be had equal to it for invigorating the body, promoting digestion, strengthening the stomach, and improving the state of the bowels.” Sounds like tasting good wasn’t a big priority!

In 19th century Ireland, making bread was part of daily life and most families lived in farmhouses where kitchens had open hearths, not ovens. Bread soda, which wasn’t perishable and was relatively inexpensive, meant that anyone who didn’t have an oven (most people in Ireland in the 1800’s didn’t) could make soda bread.

Buttermilk, a by-product of making butter, and the soft wheat for flour, the other components of soda bread, were commonly available. The bread was cooked on a griddle or in a bastible, a big cast-iron pot with a lid that could be put right into coals or a turf fire.

Brown or White, Cake or Farl?

“Plain” soda bread often appears with a main meal to soak up gravy, or at breakfast. It comes as both brown and white bread and in two main types, cake and farl.

Cake, soda bread that is kneaded, shaped into a flattish round, then deeply cut with a cross on the top and baked in an oven, tends to be found more in the south of Ireland. People in the North of Ireland seem to prefer farl — although both can be found in the North and South, sometimes with different names.

For farl, the dough is rolled into a rough circle and cut all the way through — like a cross — into four pieces or farls (“farl” is a generic term for a triangular piece of baking).  It’s usually baked in a heavy frying pan on a griddle, or on top of the range or stove. It’s flatter and moister than cake.  Each farl is split in half “the wide way” before it’s eaten and is best when hot. It’s also allowed to cool and then grilled or fried as part of other dishes — especially Ulster Fry, a local breakfast where golden and crispy soda bread and potatoes are fried in reserved bacon fat and then served with Irish bacon, sausage, black pudding, tomato and egg.

There are regional variations of the basic soda bread recipe – even though some purists would say there should be no additions to the dough.

In Donegal, caraway seeds were traditionally put in the bread.  In earlier and leaner times when raisins or dried fruit were luxuries, a fistful of them or maybe even a little sugar or an egg — if either could be spared — would have been put into the white flour version of the bread during the harvest as a treat for the working men.

The non-traditional varieties of soda breads that are made with raisins, caraway, orange zest, and other add-ins are often called Spotted Dog.

Why Is There A Cross On Top?

Before baking, a cross is traditionally cut on the top of the soda bread loaf with a knife – often said to ward off the devil and to protect the household.

Legend and symbolism aside, there’s a practical reason for the cruciform shape to be cut into the top of the dough. Slashing the dough lets heat penetrate into the thickest part of the bread and allows the bread to stretch and expand as it rises.

Slashing a round loaf with a cruciform shape ends up dividing the bread into quadrants that can be easily broken apart (the breaking of the bread). But, since Ireland is a mostly Catholic country, the symbolism of the cross can also be interpreted as blessing (crossing) the bread and giving thanks.