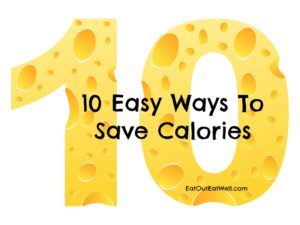 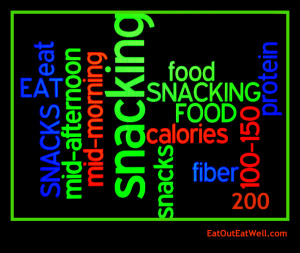 We chow down on a lot of snack food — a quarter of our calories come from them!

Snacks account for more than 25% of Americans’ daily calorie intake; since the 1970s, snacks have accounted for around 580 calories a day — which basically turns them into “a full eating event,” or a fourth meal.

When And Where Do We Snack?

Maybe we snack so much because multi-tasking has increased – think about how often you eat and drink while you’re doing something else.

Between 2006 and 2008, it took around 70 minutes to eat breakfast, lunch and dinner.  Secondary eating, the kind you do while you’re working on the computer, driving, or walking down the street, doubled from 15 minutes in 2006 to nearly 30 minutes a day in 2008.

The time spent on secondary drinking jumped nearly 90% — from 45 to 85 minutes — which explains why beverages account for 50% of the calories we take in through snacking. (Ever wonder why Starbuck’s and Dunkin’ Donuts are so crowded?)

Are All Snacks Bad For You?

No.  Research doesn’t support the idea that snacking is the main cause of obesity; for some people — like young children and older adults – snacks can be an important source of nutrients and calories.

Trying to go more than four hours without something to eat can make you so hungry that you’ll eat quantities of just about anything in sight. Eating a small meal or snack every 3 to 4 hours helps keep your metabolism revved up so you burn more calories over the course of a day and will help ward off mid-morning and afternoon slumps.

Thoughtful, planned snacking can keep you from feeling outrageously hungry, really grouchy, and can put the brakes on raiding the refrigerator or going on a buying spree at the nearest bakery.

Almost 100% of Americans snack every day, but there isn’t a standard definition of what a snack is or what motivates us to snack. We “self-define,” leaving plenty of wiggle room to blur the line between what’s a snack and what’s a meal.

A snack shouldn’t be a fourth meal.  An individual snack, like the one so many of us have mid-morning or mid-afternoon, is recommended to be between 150 and 200 calories, have at least 8 grams of protein for satiety and to keep your blood sugar stable, and at least 3 grams of fiber to fill you up. Keep the fat and sugar grams low.

Beware health halo foods – the so-called “healthy” snacks that are really a bunch of sugar and/or fat in disguise.  These include a selection of (but not all) cereals, breakfast and protein bars, yogurt-covered anything (like raisins and pretzels), sports and energy drinks, smoothies, and frozen yogurt. Check labels.  Most baked goods, chips, candy, and sugary drinks are occasional treats and not daily snacks.

If you’re not hungry, don’t snack. Ask yourself if you’re snacking because of hunger, habit, or some other reason – like boredom or anger.

Pick snacks that taste good and you look forward to eating.

This is the first post of week 4 of the lose a pound a week challenge.  How are you doing? Let us know on Facebook. 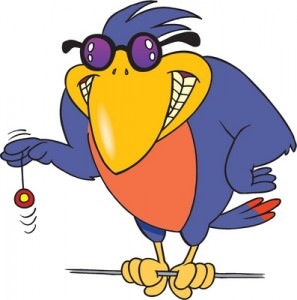 Are You Impulsive — Or Neurotic?

If you’re impulsive it seems that you are more likely to be overweight. If you’re highly neurotic and less conscientious, it’s more likely that you’ll see your weight go up and down.

At least that’s what was found in a study published in the Journal of Personality and Social Psychology — based on data accumulated over 50 years from close to 2,000 people. The researchers studied these generally healthy and highly educated people to attempt to determine how their personalities might affect their weight and body mass index.

So what does that mean for your food choices?

Think of it this way.  If you are an impulsive person and prone to giving into temptation — as many impulsive people are — standing in front of a delicious bakery window and peering in may not be the best idea for you.  It’s going to be darn hard not to succumb to temptation and turn around and walk away.  And, if you do walk in, what are the chances that you can just order coffee without getting that delicious cinnamon-pecan sticky bun to go along with it?

So maybe do yourself a favor and plan your route so you don’t pass the bakery.  By doing so you cut down on the opportunities for those impulsive food purchases that you might regret later.

And by the way, according to the study people who are risk takers — or who are antagonistic, cynical, competitive, and aggressive — also gained more weight.

Lucky you if you’re conscientious because you were found (in the study) to typically be thinner. 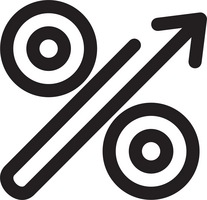 Since 2006, Trust for America’s Health and the Robert Wood Johnson Foundation have released an annual report on obesity.  This year’s report, F as in Fat: How Obesity Threatens America’s Future 2011 (available as a PDF download), unveils some downright alarming statistics.

Changes in Adult Obesity, Overweight, Diabetes, and Hypertension Over Time

“The report includes recommendations for policies to help leverage change quickly and efficiently, by providing individuals and families with the resources and opportunities to make healthier choices in their daily lives. For instance, the report calls for the strategic implementation of the ACA, the Healthy, Hunger-Free Kids Act, and other federal and state policy changes to help prevent and control obesity in America.”