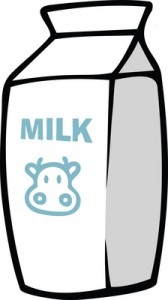 Here’s what they have in common:  they’re all made from cow’s milk but with different percentages of butterfat.  Cream is the fat that naturally rises to the top of whole milk.

A lighter form of whipping cream (32% fat) and heavy cream (40% fat) are both good for toppings.

Half and half is light cream (10-18% butterfat) that’s made by separately pasteurizing milk and cream and then homogenizing equal parts together so they don’t separate. The best use for half and half is in beverages like coffee.  It doesn’t whip, it’s not great to use alone, and is not a good substitute for cream in recipes.

In case you spot these on menus or in the market: Clotted or Devonshire cream (55-60% fat) doesn’t need to be whipped. Usually imported, the thick, yellowish cream is made by heating unpasteurized milk until the cream sits on top, then cooling the milk and skimming off the cream.

Crème Fraiche (30% fat) is a thick and smooth heavy cream with a nutty, slightly sour taste.  Used as topping for fruit or pies, it’s made by culturing pasteurized cream with special bacteria.

The difference between whole milk, 2%, 1%, and skim milk has to do with the amount of fat.  Whole milk contains 3.25% butterfat.

Expiration dates are on the carton or bottle found in the refrigerated milk section.  Abide by the expiration date and store up to 10 days in the refrigerator. In terms of health, they all have dairy benefits (calcium, protein, vitamin D) but cream and full fat milk should be used sparingly because of high fat content.

All information is for a one cup (8 ounce) serving.  For the creams, calorie counts are also given for a tablespoon measure for anyone who puts more like a tablespoon rather than a cup of cream in their coffee.